Lewis came relatively late to dance, beginning his study at the age of 18 at The University of West London, where he began an in-depth study of the history of dance. Almost immediately Lewis was recognised by the faculty who praised his musicality, mobility and natural physical facility. They encouraged him to turn his passion into a profession. The University allowed him to recognise the great potential his body held for his future career.After two years of training, Lewis decided to audition for colleges, including ballet, contemporary and musical theatre. He was successful in achieving offers for scholarships across the board. His dream and passion was beginning to become a reality. He chose to accept a place at the prestigious Bird College where he trained intensely for three years. He thrived in the competitive environment, working hard through the early morning starts and late night finishes. His commitment and drive was again acknowledged, as he grew in stamina and professionalism, resulting in some great opportunities whilst training.Upon graduating Lewis immediately began receiving offers for professional work. He performed alongside Kanye West at the o2 arena, and was already being shortlisted for numerous West End shows. Lewis was faced with an opportunity he could not refuse when he was offered the chance to travel the world performing on an exclusive 6-star cruise ship for Jean Ann Ryan. He jumped at the chance to continuing honing his craft in a professional environment, whilst exploring some of the most lucrative parts of the world including South America, the French Polynesian islands, Australia and New Zealand.After completing his 6 month contract, making excellent memories both personally and professionally, Lewis travelled to Paris to auditio for the Lido de Paris. He was offered a place working for the world renowned Franco Dragone and immediately moved to Paris to start a new chapter in his life. After a year of working in this beautiful city, which now holds a special place in his heart, he decided it was time to return home to pursue adventures that London may hold for him. Upon returning to the audition scene and whilst readjusting to life in London Lewis secured his next job performing his way through the Christmas season in Evolution's production of Snow White and the Seven Dwarfs at the beautiful Lyceum theatre in Sheffield.As his pantomime experience came to a close, Lewis received a call from Paris asking him to come back for a short fill. Lewis was once again recognised for his commitment and professionalism and was asked to return. Although he was happy to return to the comfort of the Lido, Lewis was still looking for new opportunities, so was readily travelling back to London to audition whilst balancing the show schedule. His next offer was not far away. Lewis was secured a role in the uplifting musical Mamma Mia for RCCL, where he would be part of the ensemble, covering the role of Father A. Once again, Lewis was on his way to experience something new. He stayed with Mamma Mia for 11 months performing the show in a 1,400 seat theatre each night.His experiences up until then allowed Lewis to return to London at the end of the contract with a clear goal, renewed vigour and the knowledge of the industry and what he wanted
from it. Upon returning, he was re-employed by Evolution to perform in their production of Cinderella at The Marlowe Theatre - the second largest production in the UK performing to over 100,000 people. The production was also nominated for several awards by The Great British Pantomime Awards including Pantomime of the YearWhilst maintaining his success so far Lewis has found time to feature in adverts, has offered classes in both dance and fitness to West End leads, and has been flown abroad to feature in a reality TV show. Lewis is grateful for all of his experiences so far, and tries to make the most of every opportunity that is given to him by grasping them with both hands while striving to be the best that he can be. 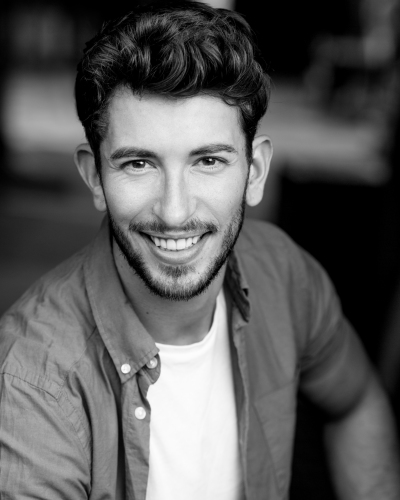